oblems.  They are common to us all.  Ann Romney wrote “Everybody has problems. Everyone has issues. ” and 2000 years ago Jesus said “Here on earth you will have many trials and sorrows.”  We all have problems and difficulties in our lives.  Sometimes they can be simple, and only in our thoughts do they become serious.  At times in my life there have been people who came up to me and said “It’s not as bad as it seems!”  And as time passed and I could look backwards I could see the truth in their statement.  But at the time all I could see was the problem and they seemed insurmountable.  Other times those problems can be overwhelming and at times can be worse than we feel them to be.

What makes the difference is what we do with those problems.  Even the limitations and problems associated with life, like disabilities and birth defects which can be immense hurdles to overcome don’t have to be things which keeps us weighed down.  Problems exist for everyone.  What needs to be looked at is what is happening in you during the problems.

Every person born has meaning and purpose.  The Psalmist wrote “You made all the delicate, inner parts of my body and knit me together in my mother’s womb.… Every day of my life was recorded in your book.  Every moment was laid out before a single day had passed.” Psalms 139:13,16 NLT  And often times what we fail to notice is it is the problems that we encounter each day which allow that purpose to be lived out.

with birth defects, physical ailments, mental issues, poverty and other characteristics we see as disadvantages.  Over time he determined that success is not achieved in spite of those perceived disadvantages . It’s achieved because of them.  Many great people in our society rose up and overcame some serious difficulties and troubles.  Our greatest hero’s are not those people who were great without adversity.  Our greatest hero’s are those who became great and accomplished great things in spite of the great adversity.

I learned this lesson myself reading about Joseph in my Bible.  Joseph was a young man who was the spoiled rotten brat who was the favorite son of his father Jacob, and he was given a coat of many colors and usually was flaunting the fact the he was the favorite.  As a result he was deeply hated by his brothers.  If you want to read his story it is found in Genesis 37-50.  After awhile having had to put up with Joseph long enough his brother saw an opportunity to be rid of him and sold him into slavery.  Joseph spent much of his formative years in hardship and trials living as a slave, and then spent 13 years in prison simply because he wouldn’t sleep with his masters wife.  That is a lot of trouble to deal with for a young man.

The important part of Joseph’s story though isn’t the wrongs done to him, or the hardships and

difficulties he faced or for how long he had to endure.  What was important was the fact that the trials actually formed and shaped his character to the point where he was a wise and thoughtful man, and not just a spoiled brat.

My life is but a weaving between my God and me, I do not choose the colors, He works so steadily, Oft times He weaves in sorrow, and I in foolish pride, Forget He sees the upper, and I the underside. Not till the loom is silent, and the shuttles cease to fly Will God unroll the canvas and explain the reason why. The dark threads are as needful in the Weaver’s skillful hand, As the threads of gold and silver in the pattern He has planned.

What will happen in you as a result of your problems?

What do we do when our plans fall apart and the things we believe God called us into seem to come unglued?  All that hard work and preparation which seems to be wasted.  Or

maybe the dreams we have in our hearts seem to be like a distant ship sailing away from us off the horizon, and we seem to be getting further and further from what we feel God has spoken.  The feelings of defeat which can go with this can be hard to live through.  And at times we feel like giving up, and wonder ‘Did God really say?’

END_OF_DOCUMENT_TOKEN_TO_BE_REPLACED 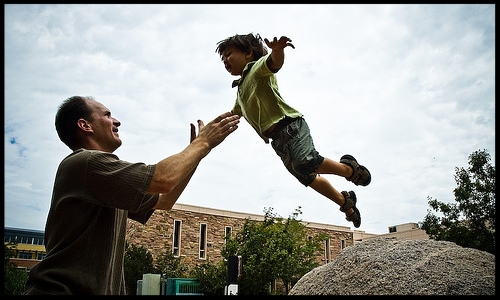 How do I know if I have faith?  For many people faith is simply a belief they have.  Something they can agree is true.  It may not change anything, and for some it doesn’t guide or direct their lives at all.  But is this really faith?

Faith is a pretty deep subject, and one that can create a lot of discussion, and at times arguments.  If we don’t know what faith is it can leave us feeling lost in a storm of differing opinions and beliefs.   Faith isn’t about everything turning out ok, and it isn’t about being blessed and prosperous.  Just as Joseph, they young man with the coat of many colors, who was sold into slavery by his brothers, and imprisoned for something he didn’t do for 13 years because of what God spoke to him about.  Faith isn’t about everything being ok, and it has nothing

at all to do with our feelings.

Faith isn’t a feeling.  It is a choice to trust God even when the road ahead seems uncertain.  As we learned in a earlier post Faith is “Believing that God is who He said He is, and that He will do what He said He will do.”

But is faith supposed to be more than just something I can agree is true? Something that I can mentally state with some emphasis, but that doesn’t guide my life?  For many people faith is just that.  That is why people can say they believe in God and yet live like He doesn’t exist.  Because faith is something we agree is true, but doesn’t affect our lives.

Unfortunately this isn’t a biblical view of faith.  When you read scripture you see that faith creates action in those who have it.  In fact the bible is pretty clear, if there is no action, there is no faith.  James 2:19-20 says “Do I hear you professing to believe in the one and only God, but then observe you complacently sitting back as if you had done something wonderful? That’s just great. Demons do that, but what good does it do them? Use your heads! Do you suppose for a minute that you can cut faith and works in two and not end up with a corpse on your hands?”

So if there is no action, there is no faith!  You can have action without faith, but you cannot have faith without action. Faith isn’t something that we give mental assent to.  It is something that drives us forward when everything around us says we should stop.  Faith is what allowed Abraham to walk out into the desert not knowing where he was going.  Because He believed that God was who He said He was and that He would do what He said He would do.  And because Abraham had faith when God said go, he could go.  Faith is what allowed Noah to build a great boat, when there had never been a boat before. 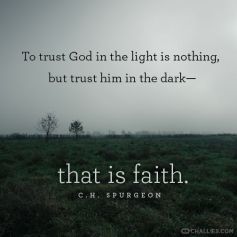 Faith is what allowed Joseph to endure everything that happened to him and not give up, although at times he probably thought of doing so.  Faith creates action.  The action it creates may be simply to hold our course and keep going.  Or maybe it is praying for the sick people you meet, regardless of what does or doesn’t happen.  Or simply sharing Jesus with people around you, even though it hasn’t gone well in the past.

Faith requires action, or there is no faith.  It doesn’t require us to make anything happen, because then we are trusting in our ability.  All of the hero’s of faith listed throughout scripture we simply people who believed God, and put one foot in front of the other doing what they knew to do, and what God had asked of them, simply because it was God who asked and they knew that God is trustworthy and faithful, and would always do what He said He would do.

Sometimes all God is waiting for from us is for us to simply take a leap and expect Him to catch us.  Big leap or small it doesn’t matter as long as it is faith moving us into taking the leap.